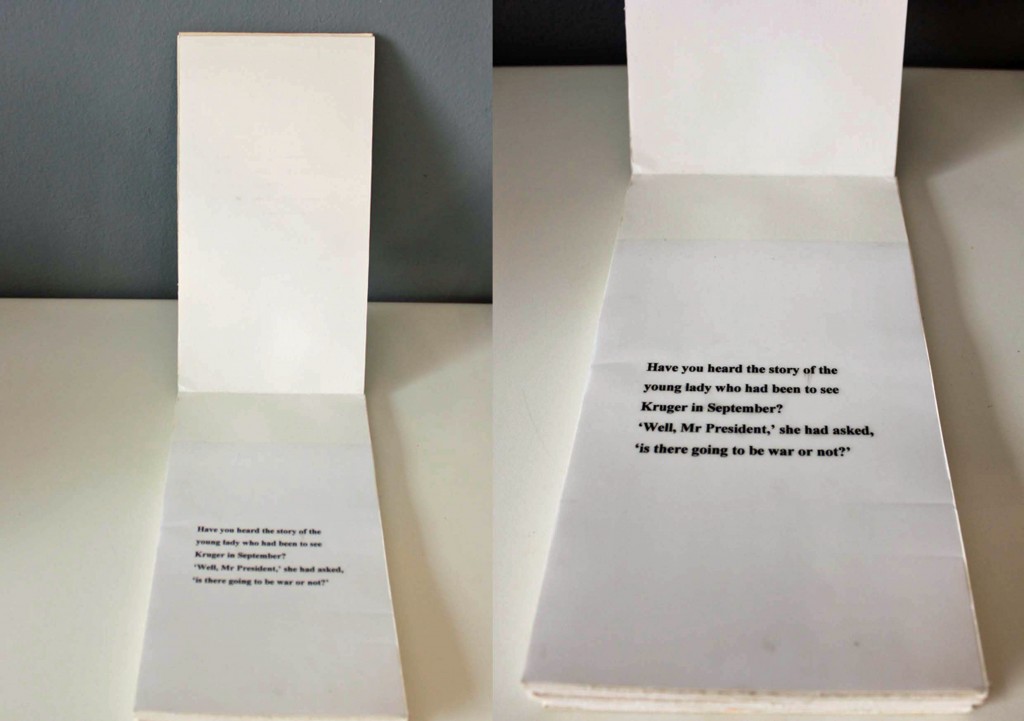 This is the second part of my two part post on artist’s books.

Have you heard the story…

Have you heard the story of the young lady who had been to see Kruger in September?

‘Well, Mr President,’ she had asked, ‘is there going to be war or not?’‘Madame I will tell you. The Transvaal is a very pretty girl.’

‘England is her lover.’

‘The lover has been refused several times.’

‘Now he is going to kill her.’ 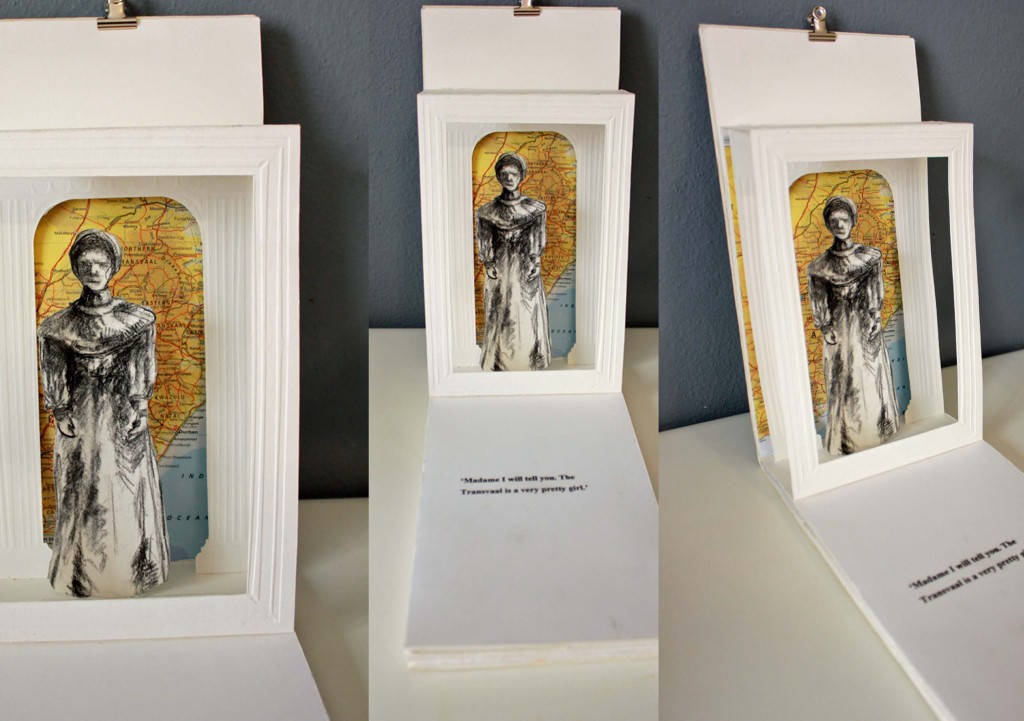 Book 2 originated from a little story I came across while doing research on the Anglo Boer War. I have been playing with the idea of making a pop-up book for a while. This little story made it all easy. I liked the idea of a staged set, as if they are in a play. A playful story made into a playful book. Again as in Book 1 it ends with a dark twist.

Transvaal was portrayed by a female figure drawn in charcoal, the scanned and printed. On page one she is introduced to the viewer framed with white embossed columns and in the background a colour map of Transvaal. 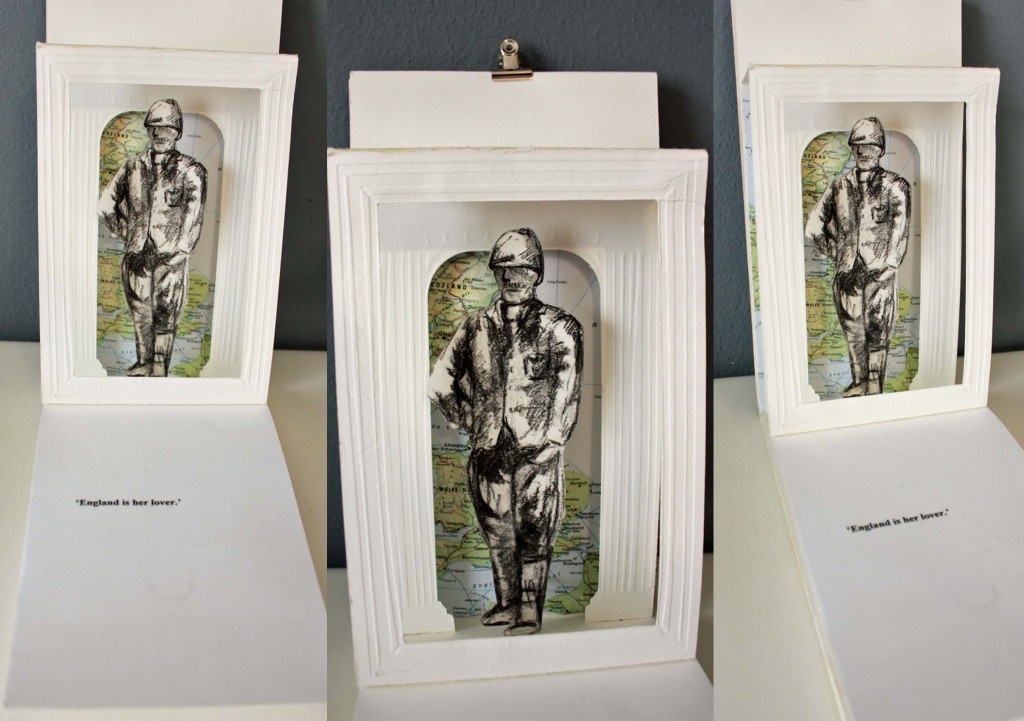 The lover, England, is introduced on page two. His image is also portrayed in a charcoal drawing, which was then scanned and printed. He is also placed in the same setting as the girl but has a map of England in the background.

Page three shows England on his knees in front of Transvaal as if he is courting her or asking for her hand in marriage. She however is turning away from England, refusing to accept his proposal. They are framed by the same white columns and a mixture of maps can be seen in the background. 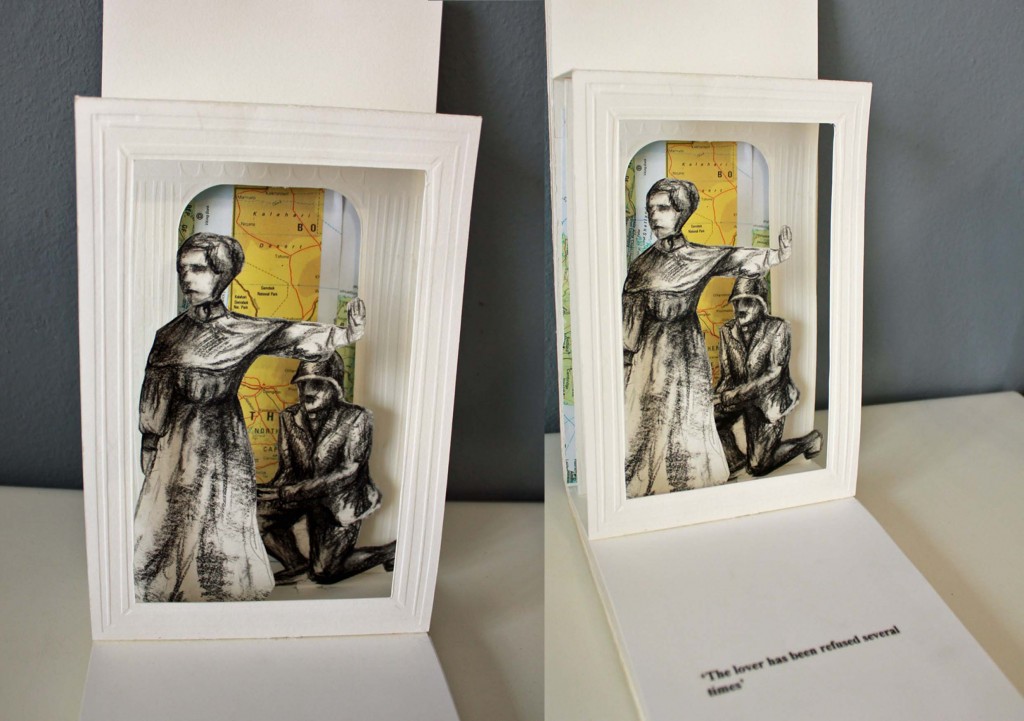 The final page needed a striking image and I found a hauntingly beautiful image of a Boer woman walking away from a burning farm house. She seemed so desolate and alone that I knew this would be my final page. 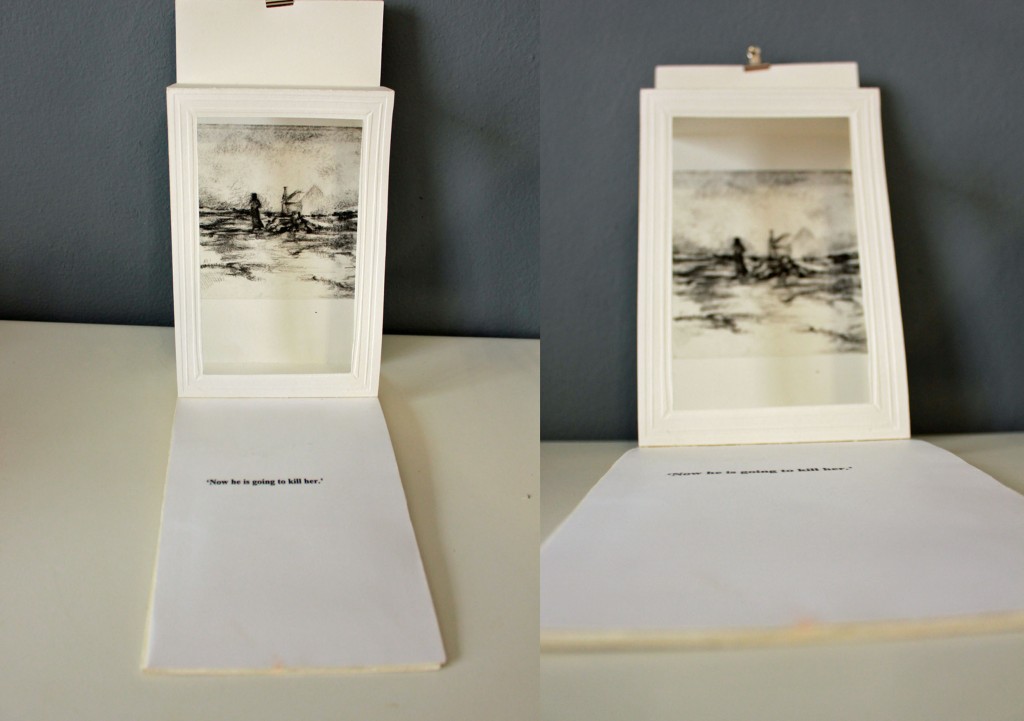 The Tramp of Power and its long trail of pain 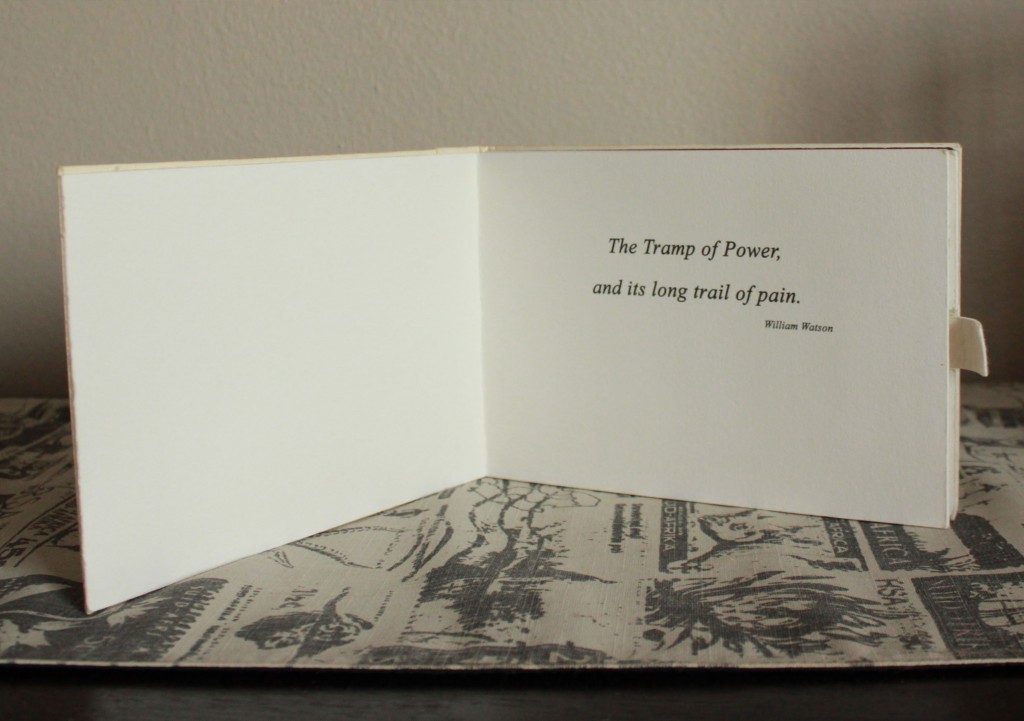 I had stumbled across something magical. A little children’s book that had a little lever you could pull and then it would change the image you saw. This is something I’ve never tried before and knew if done correctly could result in an amazing artist book.

At that stage I was reading a lot about the ‘verskroeide aarde beleid’ where the English soldiers went from farm to farm and everything that could not be taken was burnt to the ground. They did this to ensure that the Boer fighters could not return to their farms to gather energy or find a safe haven. They also realized that this would have a great effect on the morale of the Boer fighters. As I was reading and seeing these horrible images of the farms being burnt, I also came across quite a few quotes where the English denied ever using such tactics.

I started with about five charcoal drawings of farm houses. What I love about charcoal is the mystery and hidden images that form in the shadows. After the initial drawings I had all five scanned in. After the scanning I made the houses burn down. This sounds very destructive but it did not involve any real fires, I just changed the images so that it seemed the farm houses were indeed burning down. The images were scanned in for a second time.

Now I had all the images and started to put the book together. It is easier said than done as it is a quite intricate process. After all the planning, I had a beautiful book. Pulling the lever the serene farm scene changed into a burning inferno. The images were coupled with quotes where the English officials either deny or mock the burning buildings. 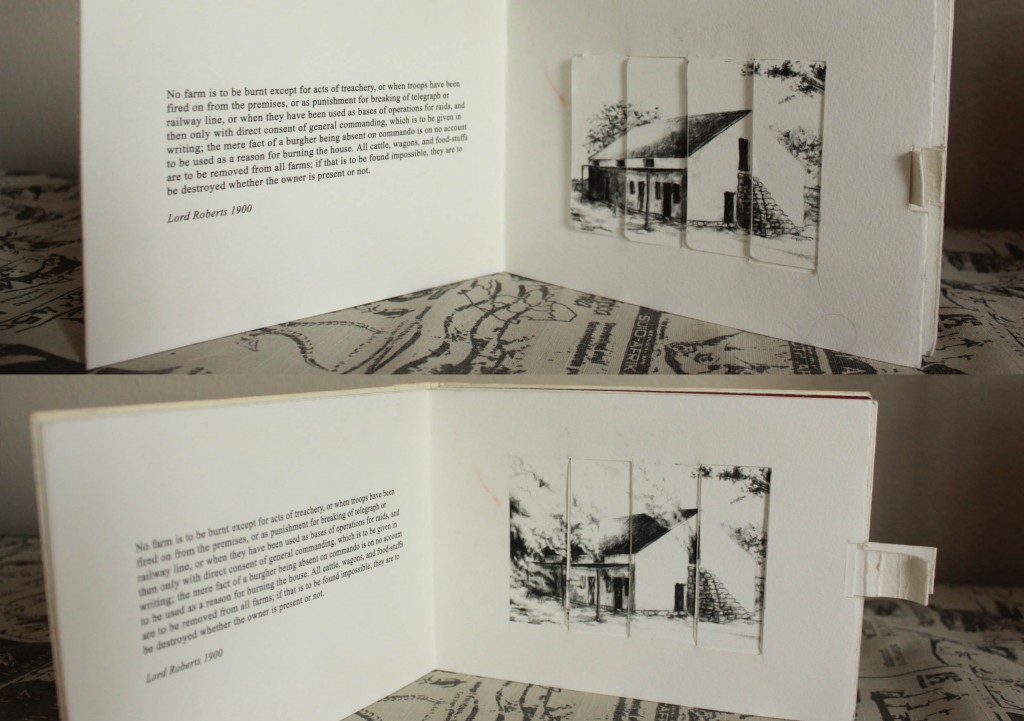 In retrospect I should have used different paper because the Hahnemeule could not handle all the handling and started to buckle and bend. 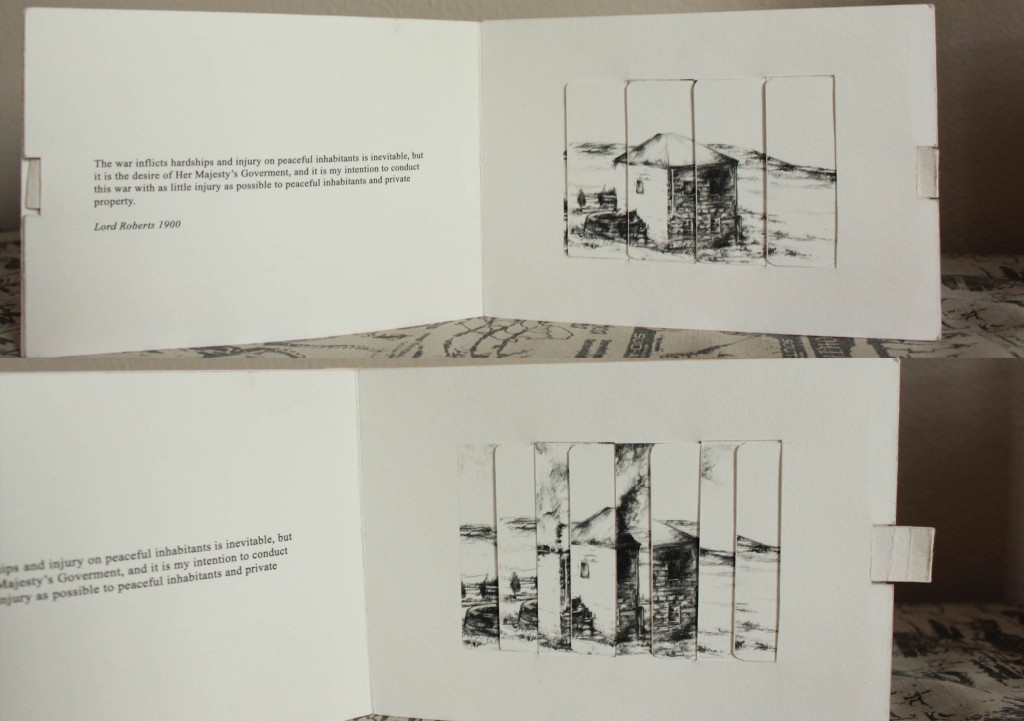 Here we see how the viewer becomes a participant and with them the artwork can’t succeed. 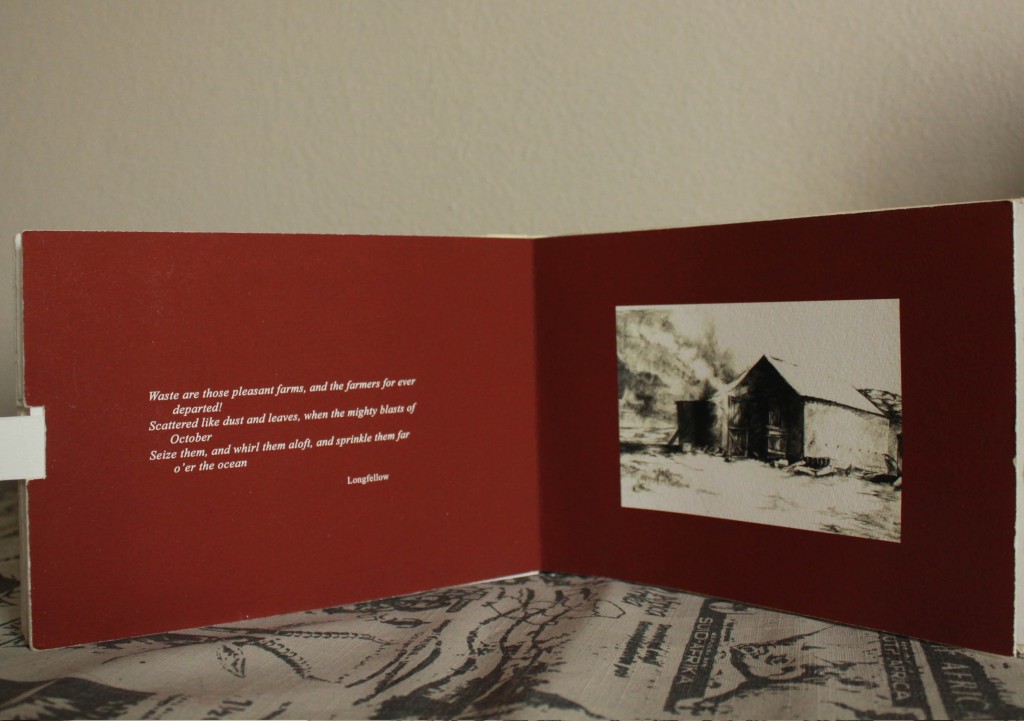